"Goldilocks and the Three Histograms"

More and more consumer digital cameras are now including a histogram display either during the Record mode or in the Playback mode. This tutorial explains just what the histogram is and how you can use it to ensure a correctly exposed picture.

What The Histogram Is

Let's look at the histograms of three pictures I took to illustrate how to read and use a histogram:

The left histogram indicates you have most of your pixels toward the dark. The pixels also touch the left edge, indicating underexposure [note 1]. If Goldilocks had stumbled onto this histogram while taking a picture, you can hear her saying something to the effect: "This picture is too dark."

The right histogram indicates you have most of your pixels toward the highlight. The pixels also touch the right edge, indicating overexposure. Looking at this histogram, Goldilocks would wail something to the effect: "This picture is too bright."

The middle histogram depicts a correctly exposed picture with the pixels mostly in the middle, i.e. neither too dark nor too bright. (Goldilocks: "This picture is just right.") Notice a few pixels touch the dark edge, so we should also expect a few very dark spots in the picture.

Perhaps the best way to understand the histogram is to look at the sample shots that go with the above three histograms.

Aim your camera out the window toward a street light at night or at a scene mostly in deep shadows, like the one above. Look at the histogram produced:

At a glance, we can see that most of the pixels tend toward the dark (D) side. The pixels also touch the left edge, so we know that there are underexposed ("too dark" -- thank you, Goldilocks) areas in our picture. To obtain a correct exposure, we can do a couple of things, taking the above picture as example:

Depending on your camera, you may or may not be able to do one or more of the above. For example, most consumer digital cameras have a maximum aperture of F2.8, so we would not be able to try the third option.

What we are doing is telling the camera to ignore its light meter and allow the light to register on the image sensor for a while longer. We want the histogram to shift right. Check the new histogram produced and adjust again if the histogram indicates the picture is still too dark. 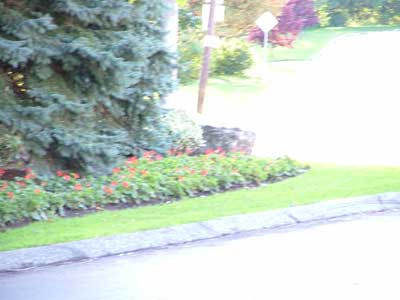 On a bright sunny day, aim your camera at a landscape photo making sure to include much of the bright sky or areas bathed in bright lights or sunlight, as in the picture above. Here, I am exaggerating with a way overexposed shot (I used +1EV to force an overexposure) to illustrate the point. Look at the histogram produced:

At a glance, we can see that most of the pixels tend toward the highlight (H) side. The pixels also touch the right edge, so we know that there are overexposed ("too bright" -- thank you again, Goldilocks) areas in our picture. To obtain a correct exposure, we can do a couple of things, taking the above picture as example:

What we are doing is telling the camera to ignore its light meter and allow the light to register on the image sensor for a shorter time. We want the histogram to shift left. Check the new histogram produced and adjust again if the histogram indicates the picture is still too bright. 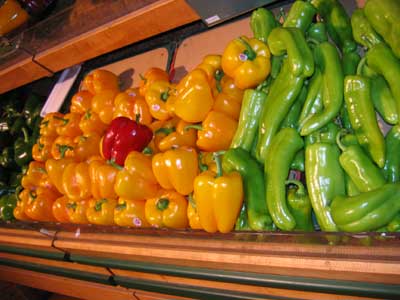 This is an indoors shot using flash. Without flash, the picture would have been underexposed (i.e., "too dark" -- thanks, G). The areas reached by the flash are exposed properly, but notice that the areas too far away for the flash to reach are dark. Look at the histogram produced:

At a glance, we can tell that the picture has neither too dark nor too bright pixels (i.e. it is "just right" -- Thanks again, G.) with most of the pixels in the middle of the graph. There are a few pixels touching the dark edge, just as we expected.

You might want to try dialing in a positive exposure compensation in this case to see if the histogram improves. For the above picture, we'll dial in +1/3EV and see if this shifts the histogram to the right slightly. Just be careful not to overexpose it! 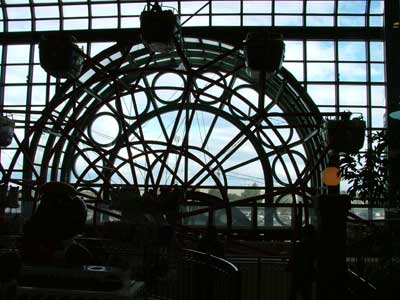 If you are aiming your camera at a landscape with dark shadows and very bright sky, you may have both dark shadows and blown highlights (histogram shows pixels touching both left and right sides). In this case, you may have to decide which is more important to you. You are in control. In the picture of the ferris wheel above, I even dialed in a +1EV exposure compensation to try to bring out some details in the shadows, but this simply caused the bright sky to become washed out. It would have been better to expose for the sky and allow the girders to go black completely. 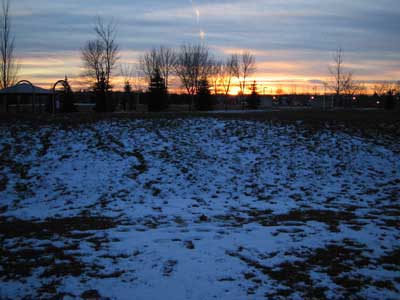 For example, when we are taking a sunset, we usually do not really care about preserving details in the shadows. In fact, we do want the foreground to go completely dark. In this case, we expose for the bright area (the setting sun) and let the shadows go dark for a dramatic sunset picture. In fact, we may want to purposefully break the rules and take a couple more of that sunset by dialing in negative exposure compensation values. This is because sunsets usually look better (with deeper colours) with a slight underexposure. (A note of caution about sunsets: never look at the sun directly, whether with the naked eyes or through the lens of a camera. The image sensor of a digital camera may also get damaged by the direct rays of the sun. When is it safe to point the camera at the sun for a sunset picture? When your eyes can look at the setting sun without requiring you to squint or block your eyes.)

If, on the other hand, you are more interested in preserving the details in the shadows, you would expose for the shadows and let the highlights be blown. Again, you maintain control, not abdicating it to the histogram.

An advanced technique you can use is to take two pictures, one exposed for the shadows and a second one exposed for the highlights (the use of a tripod is essential here). Then you would edit, erase the under and overexposed portions of each picture, and carefully merge the two pictures in an image editing software (such as Photoshop) to obtain a picture that is properly exposed in both shadows and highlights!

Of course, this technique may be extended to taking as many pictures as you feel necessary depending on how many difficult areas you have to deal with. You certainly need to be pretty good at Photoshop.

Be careful, though, because this blending of many pictures sometimes result in pictures that the brain innately recognizes as being "unnatural."

Professional photographers photoshop every picture, use software such as Photomatix, etc. to achieve the result they need. Believe me, their perfect photos do not come out direct from the camera.

The histogram is a handy graph that alerts you to the two extreme cases of underexposure and overexposure in your pictures.

Most digital cameras allow you to dial in an exposure compensation between -2EV to +2EV, in 1/3EV steps.

We have also seen that there is no good or bad histograms, per se. A histogram simply tells us how our picture is exposed and we retain the control to decide whether -- and how -- to adjust the exposure. We might decide to compensate for the under or overexposure, or we might even force an underexposure if that is the effect we are after.

Now, can someone please show G where the Three Bears are? Thanks a lot for your help, G. Bye, bye now!

COPYRIGHT © 2022 IHYPRESS.DE. A DIVISION OF IHY PRESS. ALL RIGHTS RESERVED.
SHARE THIS PAGE